This is a slightly delayed report of the two day seminar I recently attended at the Crossfit box in Northampton, given by UK Bar-barians Jay, Lee and Sai and their New York counterparts Rick and Mark, and sponsored by Boxrox. For the short, light and fluffy version of the report read below, and for the in-depth-all-about-the-training version, scroll down a bit further. 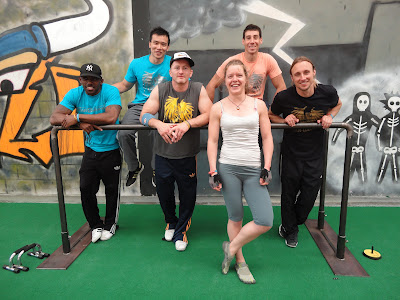 Disheveled but grinning! Thanks to Ify for taking the photo :)
From left to right: Jay, Sai, Lee, me, Rick and Mark

The Short (and more entertaining) Report
Saturday was “Basic’s Day”, covering pull-ups, push-ups, dips and L-sits. Despite the name, it involved an intense amount of crazy-ass exercise. I’d geared up my training for the event over the previous couple of weeks and tapered it off on about Wednesday, so was in pretty good condition  (or at least I thought I was), but by the end of the day still felt like the time a tree jumped out in front of my bicycle a few weeks ago. It was massively enjoyable though – the Bar-baric training style puts the emphasis on fun, form and participation, rather than boot camp style shouting (which is just as well, given my dislike for authority figures ;)

There was a really wide mix of people there – Crossfit folk whose local box it is, people who follow the Bar-barians and have trained with them before, and people who had just heard about the event via the sponsors, Boxrox, or other websites. The oldest guy was 52, and he was out training with us on this Saturday just gone, too – great barbaric attitude :) There were also actual real life girls there! Amazing. That was cool as we could work together on harder things, and it was pretty inspiring to see how strong they were. Now that I’m friends with a few on Facebook I can see why – they train hard!

Memorable bits were the warm-up from hell (normally if I say my muscles are burning I’m just whining, but in this case they were throwing off serious heat – both alarming and satisfying in a sadomasochistic kinda way) and winning an L-sit off against 5 guys (yay for all those static L-sit holds!). 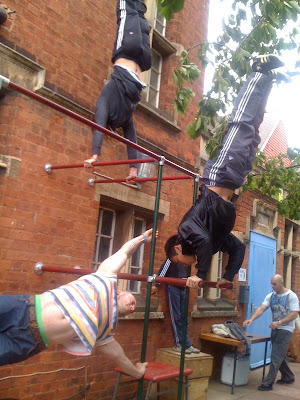 In the evening we headed to The Compound in Kettering – a youth club with a couple of sets of bars in the courtyard. Anton, who volunteers there, had laid on a BBQ and beers which went down a treat. Although I didn’t train any more, the guys did and it was cool to see the Bar-barians get some sets in. You can see Mark, Sai and Adam do a double handstand and a human flag above. 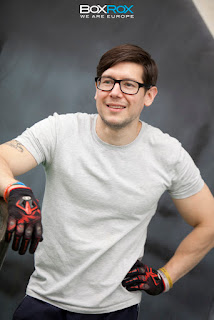 Miguel (right) and I were lucky enough to be able to stay at Anton’s for the night, which meant a hot shower and a comfy bed. We picked up some ibuprofen on the way home, which we had before bed and with breakfast – something that proved to be a very good idea, along with eggs, toast and coffee :)

The next day was “Advanced Techniques”. I have to say I wasn’t really sure I’d get a lot out of it, since my “techniques” are limited and I’m not very “advanced”, but I was totally wrong. Everything was broken down and made accesible and simple, even for beginners. Some of the techniques were really fun, like the L-sit kick outs (which you can see me demonstrating against Mark’s hand below), and something called “skin the cat”, which I never remembered hurting so much when I did it as a kid.

After a killer buy-out round involving crawling across the floor in the push-up position, it was finally time to do a bit of stretching then head back down to London for a well-earned rest :)

The Longer Report (with all the boring details)
The weekend started at 6am on Saturday morning, with a predictably crap journey on non-functioning public transport to meet up with Sai and get a lift up to Northampton. There were five of us in the car, and it’s fair to say that a lot of bullshit was spoken :) 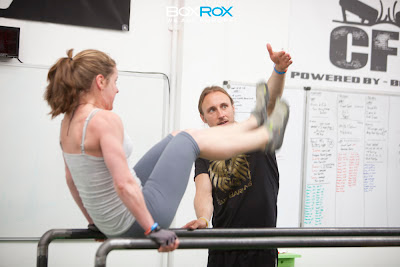 The Saturday was “basics day”, covered push-ups, pull-ups, dips and L-sits. It started with one of the most epic warm ups I’ve ever done – I will describe it so you can experience the pain in the comfort of your own home:

Put your arms out to the side, and make a “thumbs up” gesture (as demonstrated by Mark, left). Now lift your arms slightly (bounce them, I guess) upwards. Next turn your thumbs down and do the same – just bouncing your arms a few inches. Then forwards, then backwards. Now imagine a giant torturous pyramid of these things – so 1 x up, 1 x down, 1 x forwards and 1 x back. Then 2 x up, 2 x down etc. all the way up to 10. And then all the way back down to 1 again. And then, in case you aren’t hurting enough, hold your arms out to the side for 30 further seconds. OMG I have never felt heat come off my shoulders before like that before. When people talk about burning muscles it’s normally just pain, but this time I was throwing off proper heat. Crazy.

We covered proper form for all the exercises, which basically meant full range of motion (locking out), keeping your feet together, legs straight, no kipping and not swinging around. There were also easier variations demonstrated – Australian pull-ups (lying under a low bar and pulling up to it) and bench dips. After going through each exercise there was some sort of challenge – in the case of L-sits were were split into groups and had a competition to see who could hold it the longest. I won mine, against 5 guys, which was awesome. I’d been doing 20 second holds as part of my training for the event, so am really pleased they paid off. We also did L-sit kicks, where you bring your knees up to your chest and kick out (photo in the Short Report above) and L-sit cycles. 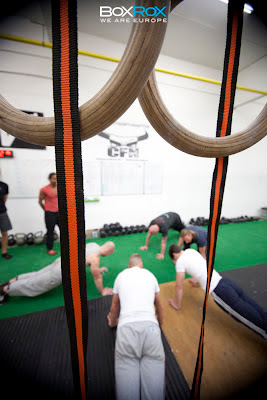 After a lunch break, it was onto some hardcore workouts. These were team-based, doing things taken from The Bar Club, which is a sort of team “competition” (it’s done in groups and scores are taken, but it’s not really very competitive – more about just doing your best. I’ve spoken about the first time I tried it here).

As a warm-up we started with an upside-down pyramid, with no rest, of 1 pull-up, 2 dips and 3 push-ups, then 2/4/6, 3/6/9 etc. The aim was to try and get as far as you can – first failed set and you’re out. Then it was on to the competition… First up – maximum number of push-ups in 5 mins. The whole team had to maintain the press-up position for this, and you take it in turn to do as many reps as you want. As soon as you dropped out of the position you couldn’t add more reps for your team (though your team could continue).

Next up was “Hang Tough”, which I knew was going to be a killer as it was one of the things I’d done first in Bar Club at Primrose. It’s basically the same as the push-ups above, only this time you’re left hanging from the bar whilst waiting for your team mates to go. Luckily my team wasn’t very good at this round, so we didn’t have to hang around too long – there is nothing like the forearm burn you get from just hanging from a bar! 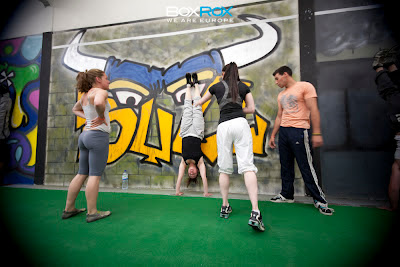 There was another L-sit session, which was a timed L-sit stopped when the first member of your team dropped it. Then a variation on a 5 Minute Drill – in a team we had to try and do 200 push-ups and 100 pull-ups in 5 minutes, rotating through team members who could only do one exercise at one time. Last set of the competition was Max Dips – when you dropped from the bars the next person took over. I managed 16, which I was pretty pleased with, although it helped that Lee was there shouting at me I think!

The day was finished off with a buy-out consisting of each team going into the press-up position, then walking one at a time 20m (still in the push-up position). Once everyone got to the end, we had to go back to where we started… backwards. Then hold the position for 10 seconds once everyone was back. Big thanks to Mark who decided to combine two teams, meaning that we had a massive team of 8 people, so had to stay in the push-up position waiting for everyone else to finish for an extra long time! 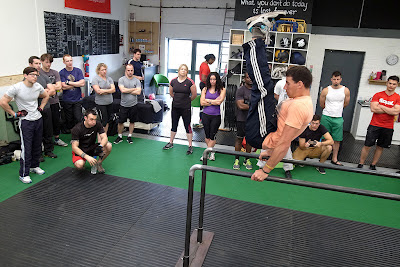 Rick demonstrating the V-sit. Thank you to MNL for this photo. It’s totally worth clicking through to the large version of this photo and having a look at the expressions of the people in the background – they will give you some idea of how impressive a move it is!

Sunday was the “advanced techniques day”: muscle-ups, handstands (photo above), handstand push-ups (HSPU), front and back levers (see picture below of Jay and Sai doing back levers), V-sits (demonstrated by Rick, left) and planche. I was worried that it would be too advanced for me, but for each exercise progressions were taught, which meant that everyone, whatever their level, could benefit from it. After the guys showing us what to do we all had a go, and worked in partners to help each other out, spot and check form. 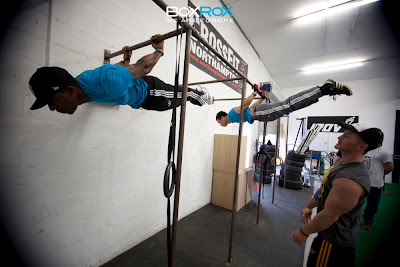 My favourite part was learning the “skin the cat” move, where you hold the bar but roll backwards through your arms, lower your feet down until you feel like your shoulders might dislocate (kidding…) and then engage your abs to pull yourself back through again. It’s an insane full-body work-out and you can feel the shift from the muscles on your back to your front as you move through it. Also it’s rare now that I have to focus so hard on my abs, so it was cool to feel them doing so much work.

Although still physically taxing (using a lot of muscles that hadn’t seen much action before!) it wasn’t as intense as Saturday, at least until the buy-out… Diamond push-up pyramids… 2 diamond push-ups (make a diamond with your hands – forefingers and thumbs touching), stand up, 4, stand up, 6, stand up etc. up to 10. Then back down to 2. Ow.

After a load of stretching it was back in the car, this time with the awesome Ify of Fizzycal, to eat a good dinner and get some sleep. On the Monday I saw the guys (Jay, Lee, Sai, Miguel, Ify, Mark and Rick) again, for a brief session at Primrose and some gossip over delicious Jamaican food.

Then it was back to real life, with a renewed sense of enthusiasm for training (not that it had ever waned, to be fair) and a series of plans for what to achieve over the coming months…

Thanks to Martin at Boxrox for the non-credited photos, and also to Tim for his write-up :)