Matters of the heart

Last week I saw a status update from Adrienne on Facebook saying that she’d bought a cows heart. Being a) into food (actually I’m an ex-professional cook – not sure I’ve ever mentioned that on here before) and b) feeling in the mood for adventure, I decided that I wanted a heart too. I called the local butchers and placed an order for one. Things didn’t get off on the sanest of footings, since their question of when I needed it by was met with the answer of “I don’t mind – I just want one”.
I’m not quite sure what went through my mind when I thought about what it might look like, but for some stupid reason I figured a cows heart was going to be a third of the size it actually was. So come Friday, my heart arrives, and I go and pick it up… 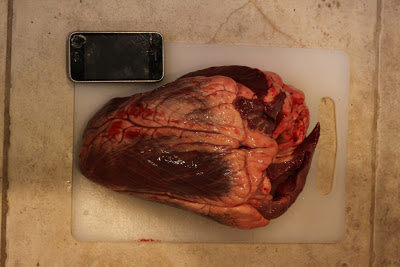 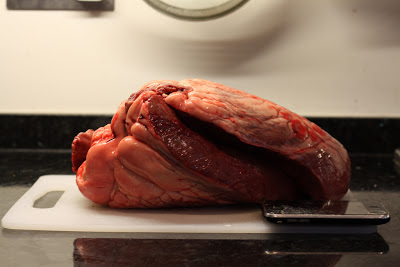 These pictures (with my busted iPhone for scale) don’t really do it justice. The thing was HUGE.

Anyhow, this post is to document the prep process (cooking will follow on another post) since I’m sure you will all want to have a go at cooking this tasty organ. (Wow, never thought I would write those two words on my blog…)

Rinse the heart under the tap. This bit was slightly disappointing as I was hoping that I could direct water into one cavity and for it to squirt out of another, but that didn’t really happen. Anyhow, this video does give you a better idea of the size, and you can also laugh at the fact that my top is inside-out (hastily thrown on in case of blood-related mess).

Tip!
Sharpen your knives – I used a big general purpose knife and a flexible filleting knife – before starting. If your kitchen knives are too blunt to be sharpened by yourself (or, even worse, you don’t have a sharpening steel) then shame on you – take them to a professional, pronto. Blunt knives not only making chopping a chore but are (more importantly) dangerous – it’s the resistance against what you are trying to cut that normally causes slippage and other unpredictable knife behaviour. Look after your knives and they will look after you :) 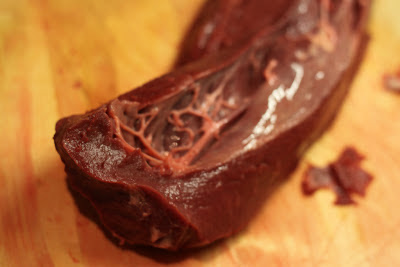 The first thing I did was an initial trim to remove any obvious unwanted bits (gristle, blood vessels, unidentified things) and the fat. The key point to bare in mind at this stage is that what you want to end up with are lumps of lean dense red meat, so cut off anything that doesn’t fit that bill. The inside will have these fibrous stringy bits (see photo above) so slice them off, making sure to avoid cutting away any good meat. Do the same with the fat and also the “silver” – the shiny membrane on the outside. This is where your sharp flexible knife will come in handy. I tried to keep the fatty bits clear of meat and other non-fat things for Step 3.

This is what I ended up with at the end of this stage – two semi-trimmed hunks of meat, a pile of waste (back left) and a pile of fat (front right). 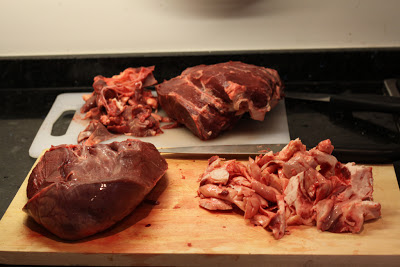 Step 3 – Rendering down the fat

This step is optional, but since this is an organic cows heart and I eat a lot of quality fat, I wanted to keep the fat and make it suitable for other uses, like frying things. The way to do this is called “rendering” – you basically melt it at a low temperature for a long time. The fat will melt and any unwanted bits will remain in the pan.
Put all the fat into a frying pan (I actually chopped it up after taking the photo below – smaller pieces = greater surface area = better rendering) and put it on a low heat. You can stir it occasionally, but it’s otherwise fine to leave it for a few hours whilst you get on with other things. Make sure the heat isn’t high enough to colour the contents. 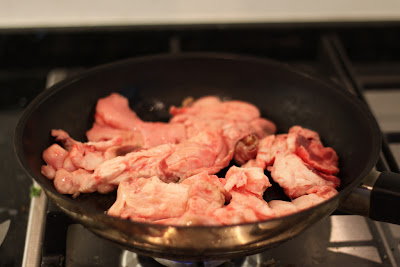 After a few hours it will end up looking like this: 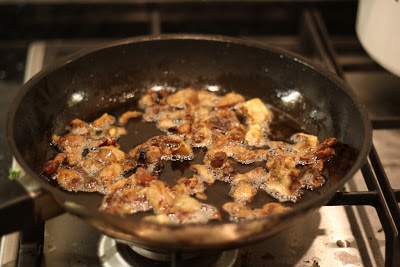 You will actually get more fat off it than shown here, but I used some during the cooking process for frying off the meat and the onions for the stew. Let it cool slightly then pour the fat into an clean jar. Don’t put the lid on until it’s completely cool otherwise you’ll get condensation in there which is not desirable. When it’s cool then put it in the fridge, where it will keep for a few weeks.

Whilst your fat is rendering, trim the meat again. Make sure to remove all the membrane, any veins or weird looking bits and anything else that doesn’t fit the required criteria of “lean dense red meat”. I have no idea what all the bits I cut off were, except for a giant tube which I could stick my thumb through which I suspect was the aorta. It is easiest to cut the heart into smaller chunks to do this – it will be obvious how to do this, since it has a natural grain and formation to it.

This is what you will end up with: 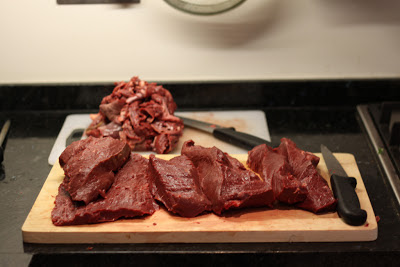 Throw the waste away and, assuming you want to make a stew, the recipe for which will be coming up shortly, cut your meat into bite-sized pieces. I actually kept the nicest (softest feeling, best shape) piece for pan-frying too, since the article I read made it look really damn tasty.

Overall I’d say it was an easy enough process – the trimming is a bit fiddly but it’s very obvious what to remove and what to keep, which makes it suitable for someone new to butchery, and even to cooking. When I was a chef we used to get in whole sides of beef and I’d have to trim them and separate the fillet from the rest of it. We used to sell the fillets for about £25 a main, so it was hundreds of pounds worth of meat in my hands. Eek. Luckily this is nowhere near as frightening since at three quid for the lot, an error isn’t a big problem.

There is also the obvious fact that it’s a heart. An actual *heart* FFS! How awesome is that?! Not every day you get to see an animals heart, let alone get to chop it up and look at it so closely. Ok, maybe that’s just me then.

In case you want stats, the heart weighed just over 3kg.
Of that 375g was fat (pre-rendering)
And 1.8kg lean meat (pre-cooking).
For that much lean organic meat, I’m not sure you could get much cheaper.

The next post will give you the recipe for (and review of!) the stew, and also the outcome of my pan-frying experiment with the bit I kept aside.