At the start of summer I signed up to do one of those mud/obstacle/trail runs that have become so popular in the last few years – the Tough Guy “Nettle Warrior” event. It’s supposedly the biggest, best and most hardcore of all of them, with 17km of running through fields, woods and water, and with obstacles bigger than several average sized semi’s (by which, of course, I mean the type of house).
Those of you who know me in real life will know that running around through mud is something that suits me down to the ground, being both a massive tom boy, a big fan of the outdoors, and, well, quite into getting dirty too, so it’s been the perfect thing to get involved in whilst letting my body heal after over-doing the bodyweight training and injuring my arms. I thought I’d do a short write-up of the event (somewhat belatedly given that it was on the 27th July!) here, although if you can’t be bothered to read the below then at least check out the video that Chief Mudstacle Officer, Pete, filmed of us, Team Mudstacle, on his head cam:
Here, in all their pre-race clean glory, are Team Mudstacle: 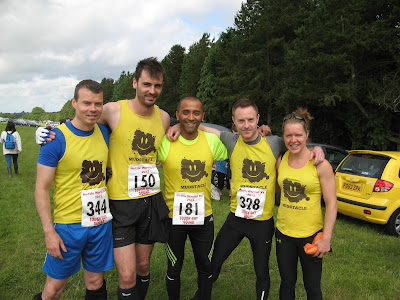 From left to right: Jon, Pete, Jat, Chris, me

Anyhow, hot on the tail of the discovery of my new-found team spirit, I typically managed to injure my foot several weeks before Nettle Warrior – a result of hammering it a bit too enthusiastically down a hill in Richmond Park and bruising (or something) my metatarsal. This basically meant that I was unable to run for three weeks before the event and had to get all my cardio through cycling on a stationary bike – not at all ideal. In fact it’s nigh on impossible to do without looking like you’re trying to emulate having the legs of Speedy Gonzalez whilst attempting to power the bike through the mirror in front of you. As Nettle Warrior rolled around, I had no idea how fit I’d be, having been limited to bike sessions and missing out on three weeks of team runs. Add to which I had invested in some silicon in-soles with raised pads to protect my delicate little metatarsals, which more than doubled the weight of my shoes, I wasn’t in the best state to run fast. All in all, I really couldn’t say I was optimistic about my chances of performing well, and mostly I was worried about being the slowest person in the team and holding up and annoying everyone, or ending up in too much pain to finish the event. 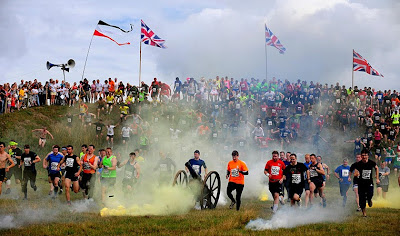 As it happened, I needn’t have worried. The running wasn’t nearly as bad as I thought it would be and my foot held up. My team were all pretty much the same pace, and my upper body training meant that not only could I do the obstacles, I could also show off my monkey-like upper body strength ;) The only real “Arghhh.O.M.F.G” moment came at the top of the highest structure where you have to cross some balance beams. I was cold, having just completed the water section, and Chris going “oh wow look how high we are!” gave me a sudden attack of the scardy cats. Thankfully the moment passed, although not after a couple of seconds of clinging onto the rope at the sides. 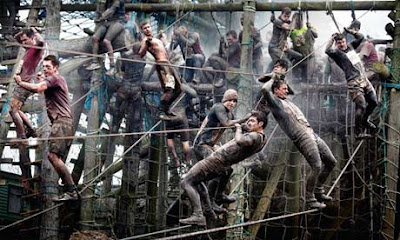 There was, however, one element of the course that caught out Team Mudstacle, badasses though we are: the electrics. Since I signed up for the event in the spring, the guys had spoken extensively about the sections of the course which involved live electrical wires. Mostly these took the form of hanging “curtains” which you had to get through without being shocked, or ones that hung from barbed wire which you had to crawl through. However, the bit that inspired all sorts of horror stories, most of which gave the impression the protagonist was left a whimpering shell of his former self, was something called “The Torture Chamber”. By the time the day rolled around, I was pretty anxious. 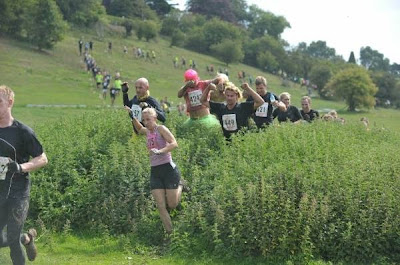 My first encounter of them on the course was a section with a lot of stinging nettles and a wooden frame with wires hanging down. There were probably about ten rows of these, about five metres wide, with wires about a foot apart. I was wearing rubberised gloves to protect my hands, so figured I could just push the wires away and plough through. A winning tactic, although the next time when I was soaking wet it wasn’t so smart and I got shocked both on the hand and on my wet leg as one of the wires swung back and caught me. Still, they weren’t that bad – most kids who were brought up in the countryside have touched an electric fence at least once in their lives.  Eventually we got to the dreaded Torture Chamber – an innocuous looking shed, nearly pitch black inside, full of stinking mud and whose ceiling was lowered to force you to crawl through said mud whilst avoiding live electrical wires hanging mere inches from your head. What really sealed it as a truly horrible obstacle though was the screaming… There’s nothing quite like the sounds of grown men yelling out in pain, the splashing and thrashing of their limbs with an under-currant of vague groaning sounds to fill you with dread. 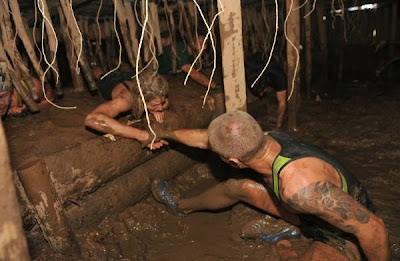 Inside the Torture Chamber

However, the three months of fear-mongering I suffered at the hands of the boys made me ultra-cautious. I navigated through carefully, kept my head down, didn’t let my legs kick up, avoided the size 12’s of the dude in front of me, and made it through unscathed. That was not the case for Jat though, who unfortunately got shocked in the head, causing him to go face-first into the mud and as a result got mud in his eyes. We had to leave him with St. John’s Ambulance staff at the side of the course, and afterwards took him to a local hospital and found out it was as scratched cornea and had to drop out.

With all my fears about my foot – about holding back the team or having to drop out – I really felt for him. Not only is getting stuff in your eye one of the most unpleasant injuries you can get, offering no real respite from the annoyance and pain, but he pretty much went through what I was so worried about. Luckily he’s now recovered and is even up for doing it again next year, so thankfully no permanent harm was done, apart from him having to take a couple of days off work. 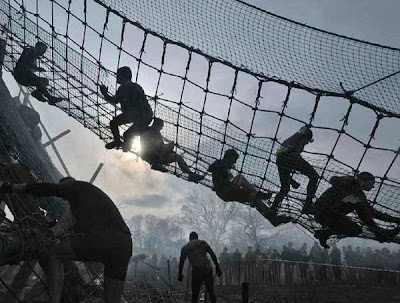 Despite that, it was a really good event. It is somewhat chaotic in its organisation, being run by a bizarre character called Mr Mouse (who purports to have been in the army although I suspect was more likely to have bought a costume on eBay), and being held on land that is normally a horse sanctuary which is littered with random farmyard equipment and liberally sprinkled with horse poo, but the course itself was excellent. Lots of varied terrain, a fun and challenging selection of (frequently enormous) obstacles, lots of water sections, stinging nettles, mud and a really good atmosphere from start to finish. 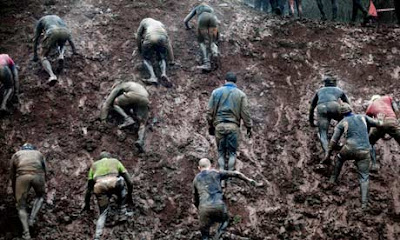 If you’re looking for a challenge then I definitely recommend signing up. In fact if you don’t mind the cold then why not try their winter event in January…?