After I finished school for the summer, I had a month to travel around before having to return to England. Japan Rail offer a special kind of (very cheap) ticket aimed at students called the seishun jyu hachi kippu which gives you five days of unlimited travel on “local”, i.e. slow, trains for 11,500 yen. You don’t have to use those days consecutively, so being time rich and cash poor I used mine to make epically long journeys like the one below, spread over the course of a few weeks. 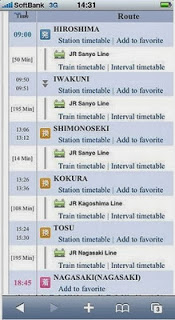 You will notice that the photos on this post are better than the others, which is mostly attributable to the fact that I purchased a Canon 50D and (still) my only lens – a 50mm prime. The juxtaposition of the old/new and traditional/modern is one of the things that makes Japan so utterly amazing. You see stuff like this everywhere and vending machines in places you least expect to see them. And yes – some even sell beer! One of the first pictures I took with my DSLR, but still a favourite – some flowers near my apartment in Nagoya. Although people don’t really garden in the same way as we do here – they put most of their energy into growing their own food, rather than plants – they do often have big beautiful flowering shrubs. One of my favourite buildings – a warehouse (or something) in Tokoname. Like all the colours of the corrugated sheeting. (Yeah – weird like that). Tokoname used to be a major pottery centre – building bricks and tiles as well as tableware and so on. Now there are still a lot of people producing amazing ceramics and pottery but not really any industry, so there’re quite a few empty buildings. Young couple relaxing under the cherry blossoms. Hanami – literally “flower watching” – is a very chilled time in Japan – a lot of people hae parties and sit out all day drinking and eating. Water under a big roofed pergola thing at Korakuen in Okayama (one of the three top gardens in Japan). Flower and lantern at Korakuen. A famous sculpture of a kabotcha – Japanese pumpkin – by Yayoi Kusama on the island of Naoshima, which has established itself as a destination for modern art, and has a couple of museums and also a sculpture park that sprawls across the isle. Couple of shots of Tomonoura, a sleepy fishing village near Fukuyama. The famous A-dome of Hiroshima. Not much can prepare you for the emotionally gruelling event of visiting the site of the greatest act of human aggression on the planet (so far). And the famous red tori (gate) at Miyajima. This brings back some crazy memories of Sharifa and I climbing up the hill behind the gate for 2 hours in 37 degree heat. One of the highlights of the long hot summer – kakigori. Shaved ice with sweet adzuki beans and green tea syrup. Delicious. Kofukuji temple in Nagasaki. Nice place for a cup of tea :) These colours remind me of Nagasaki, which has taken a lot of influences from the other cultures that it traded with, having the only port, Miyajima, which was open to trade with the rest of the world during Japan’s period of isolation. Roofs and wall from Nagasaki. This is actually the gravestone of my great great grandmother, who was the wife of a Dutch ships captain and fell ill and was buried in the international cemetary on a hill overlooking Nagasaki. Never wrote about this at the time, which is a shame because it’s a cool story involving some breaking and entering. One day… When I got back from travelling there was an international karate tournament on, and I also took (and passed) my shodan (1st Dan – black belt) grading. The guy on the left is Matsuzaki Sensei – the person to whom I made my first Japanese phone call to, asking if I could come and train with him. I ended up training five times a week in his amazing dojo with some incredibly talented people. The guy on the right is the head of Wadokai karate in the UK.

Anyway, that’s mostly it about Japan for now, although I’ve got a draft post saved which has some of the weirder things I came across which I’ll try and wrap up soon. If anyone’s heading over to those fair isles and wants some advice on things to do then just give me a shout :)