This post is wayyyy overdue, but now it’s the new year (and still January, just…) I’m trying to get through my backlog of draft posts that I have accumulated over the past year or so, and to do that I’m actually going to have to do something with the clusters of ill-formed sentences scattered across my hard drive. It’s related to a couple of events that took place last summer, but hopefully they will be interesting and entertaining enough to read and get something from. In fact, if you’ve ever entertained thoughts of taking part in a mud/obstacle run or trail run then you should definitely read on.

My plan for summer was originally to do Nettle Warrior at the end of July then shift my focus back to bodyweight training. However… I’d injured my forearms in late May and never really gave myself enough time to rest and heal. I knew that if I stopped running I’d pretty much go straight back to my full volume of training (I don’t have a lot of will power when it comes to denying myself the things that I want!) and probably end up back to square one with my injuries. I therefore decided that more running was a good plan – I was starting to get fitter and not hate it quite so much, plus it would give me enough of a distraction from completely wrecking my body again.

So I signed up for one more big mud run event – three laps of The Nuts Challenge – which I was assured by the Team Mudstacle was the most demanding of all the UK mud runs, the only thing worse being doing four laps. What it lacked in scale it apparently more than made up for with relentless and challenging obstacles and a shitload of running. 21km of running to be precise. Eek!

As training for Nuts we, Team Mudstacle, decided we’d do one of the Enduro events. They aren’t obstacle races but a series of cross-country races called Brutal. They come in a variety of increasingly horrible flavours – 10km, 20km or, for the truly insane, 24 hours. They even have one you can run with your dog, the CaniCross. Initially the Brutal 10km was being touted as a good idea, so I promptly set about persuading everyone that we should really do the 20km instead. Isn’t that what being part of a team is all about?! 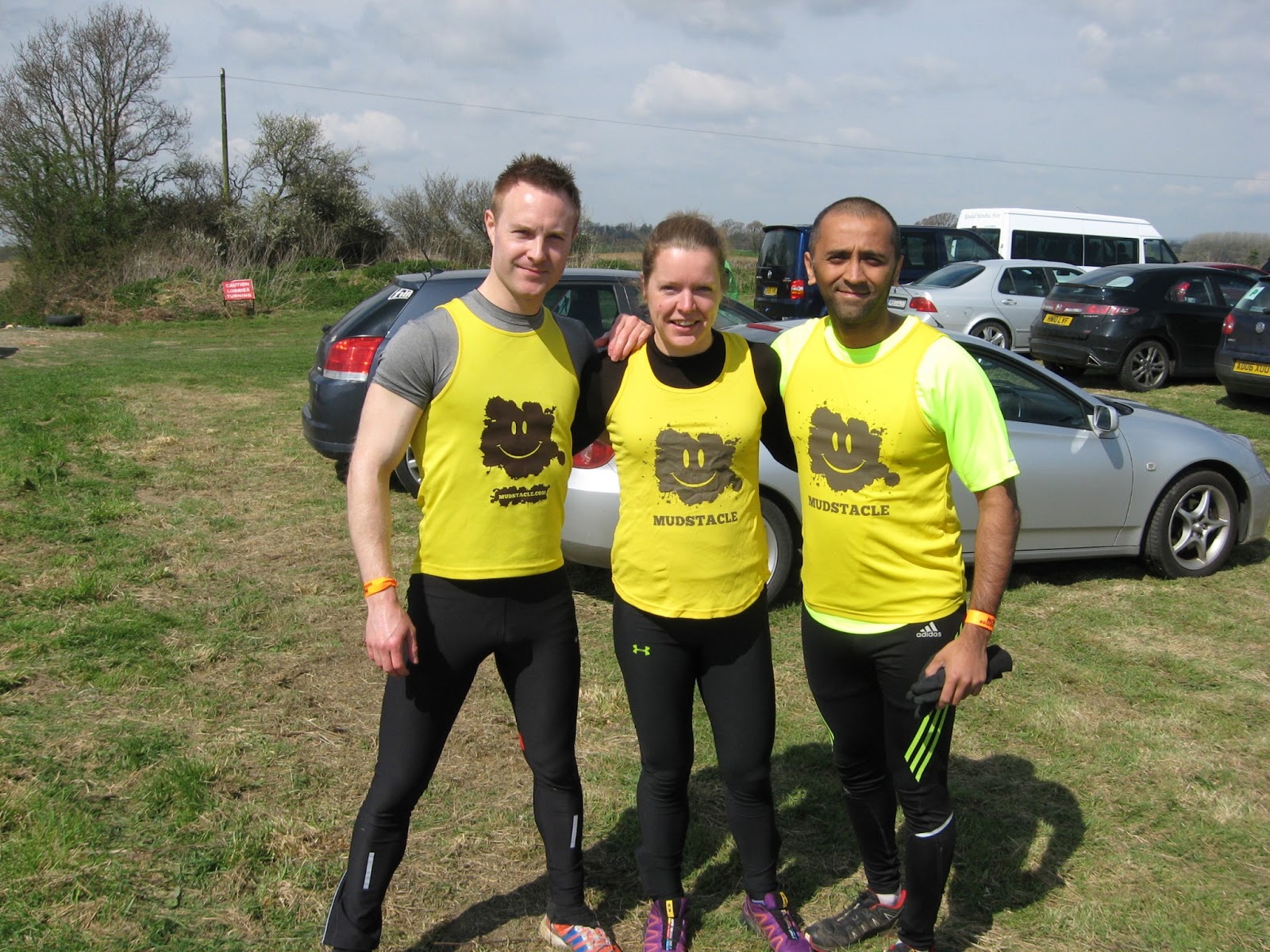 On the day though, we (myself, Jat and Chris) were pleased to find out that not only was it not very brutal at all – running Box Hill pretty much prepares you for all sorts of hideous terrain – but that much of it was through pine and deciduous woodland, which meant the ground was mostly soft and springy underfoot. Although we all ran pretty well, we ended up being one of the last to finish, the rest of the competitors being proper trail runners that looked more like whippets than us, who mostly use running to supplement a strength training regime. We made it in 2h10m (positions 58, 59 and 60 out of 80!), with the fastest man coming in at 1h28m and the fastest woman at 1h34m. Crazy times. Although the lack of women did mean that I was only 11th out of 20, which sounds much better ;)

The best story of the day was that I’d said to Chris that my strategy was to try and overtake any women in front of me. As the last two kilometre’s came up, there emerged from up ahead another woman. Chris, being the strongest runner, took off in pursuit, urging me to keep up. That I did, but it pretty much killed me. Eventually we we made it past her with a fair bit of “she’s over there by that tree!” and “come on Fi!”. As we were driving away from site after the race, there was a somewhat bedraggled looking girl trying to hitch a lift to the nearest station as she’d apparently spent all her money on a burger (she was 16 – an age where that is an entirely acceptable thing to do). As we pulled over to let her in the car, we realised it was *her*! She was absolutely lovely and I felt a bit bad for ruthlessly trying to overtake her. 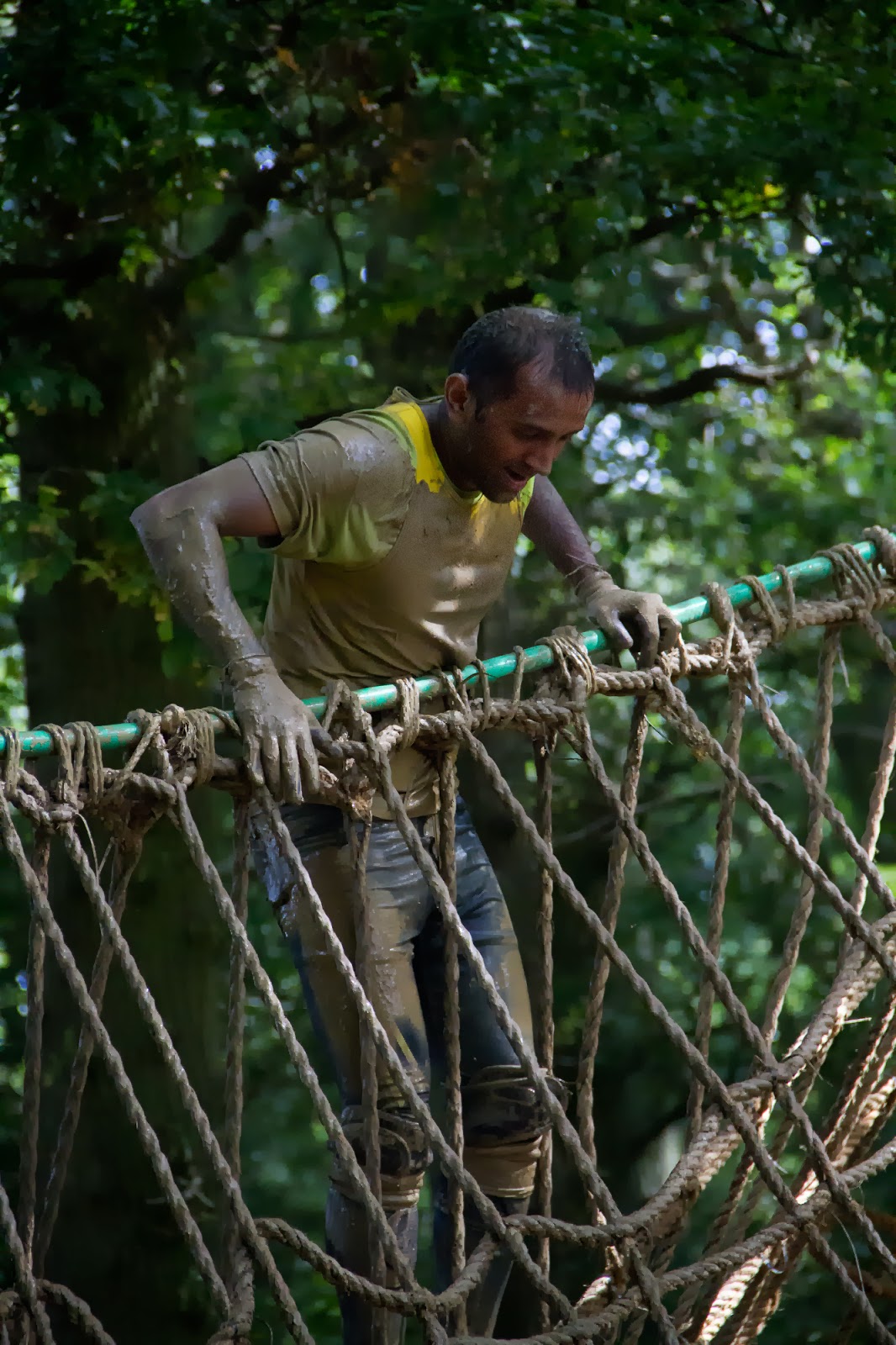 Luckily Nuts Challenge, being compromised of so many obstacles, was much more up my street. I’d done lots of running so felt my legs were unlikely to give out on the day (even though at 21km it would be, and still is, the furthest I’ve ever run), and my upper body strength has never been a problem. The first dilemma though, was about the team. This time there were four of us: myself, Chris and Jat, plus Jamie (Jay), who has done lots of runs before but didn’t normally come on our weekend training sessions. Pete, fresh from a stag do the night before, and Haemish were doing four laps so had set off before us. Chris and I had been training pretty hard for Nuts – I’d ramped up my week-day running and cut back on the bodyweight training to make sure I was fit enough, and we were both keen to try and do the race in a decent time. It was a hard decision to make but we ended up leaving Jay and Jat and trying to hammer it together. It helped that Jay had an attack of nerves at the top of a fireman’s pole quite early on, thus leaving Chris and I little choice but to keep going so as not to be delayed so early on. 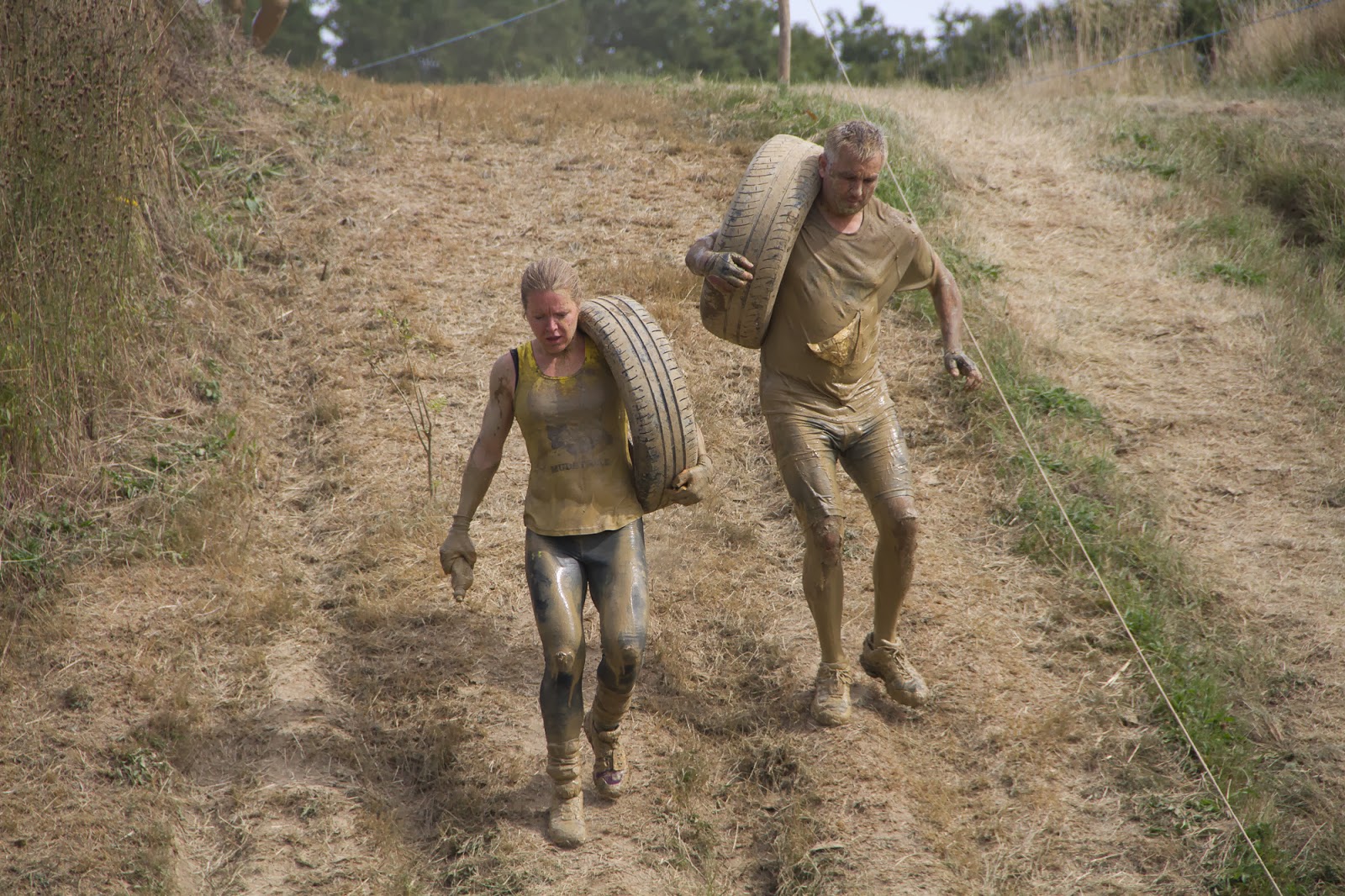 I was worried doing three laps of the same course would make it even tougher mentally, but actually the obstacles were all fun and engaging – quite a lot of climbing in and out of streams – up muddy banks with cargo nets slung over the side – lots of tire walls to climb through or over, big oil can tunnels to squeeze through (including one set that went up a steep incline and pretty much required you to muscle up out of the top), and towards the end of the 7km route a lake to wade through and a series of large inflatable rings to cross – totally exhausting. There was also a really long water slide into a big muddy pit, of which Jay was by far the most stylish of us to go down: 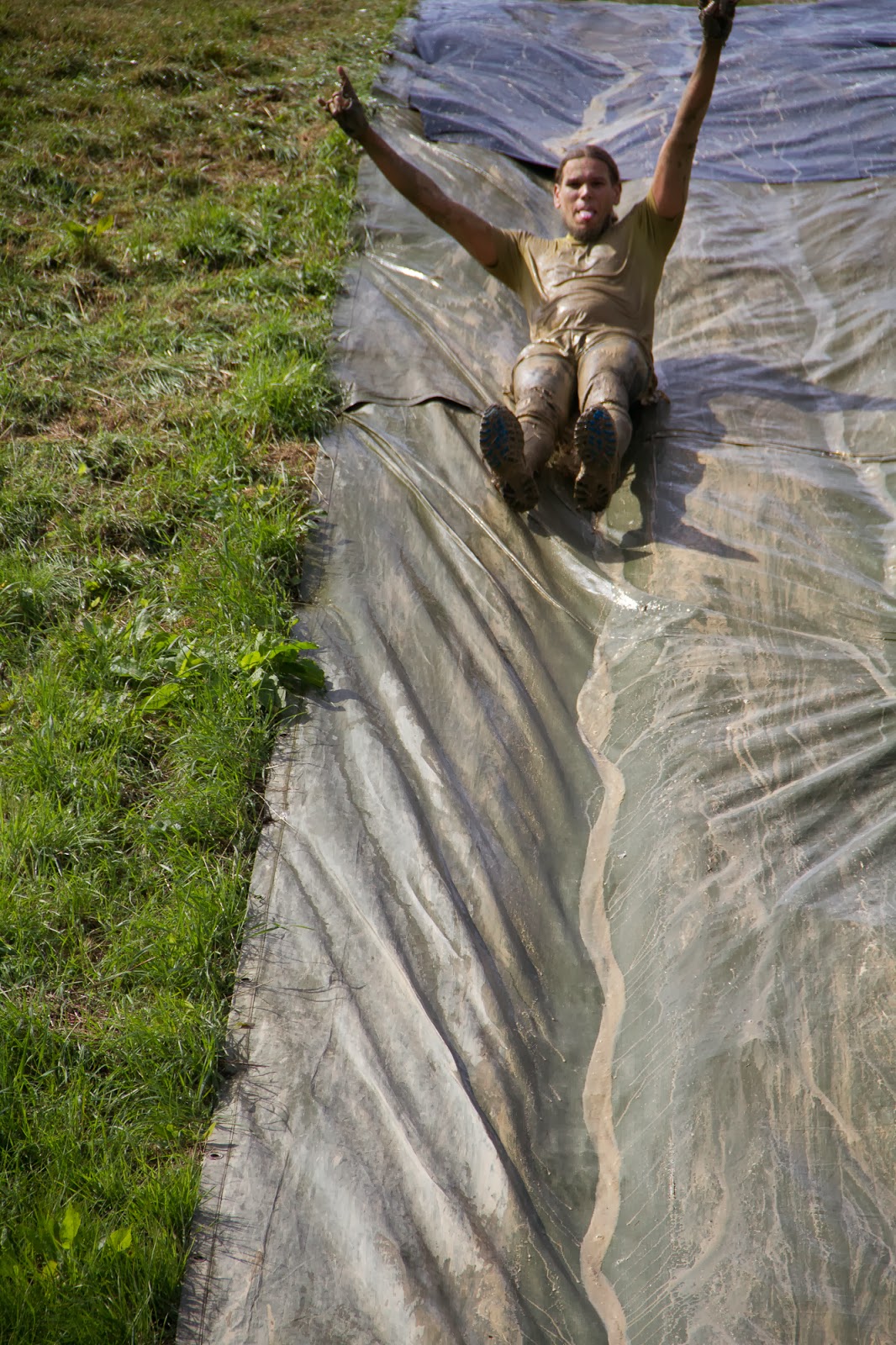 The marshalls were great – definitely the best of any of the OCR’s I did – happy and encouraging, and really made you feel like you were doing well, instead of merely making sure you didn’t slip and fall to your death, even though one of them was eating a burger – tantamount to torture if you’re hungry, which I pretty much always am during runs. 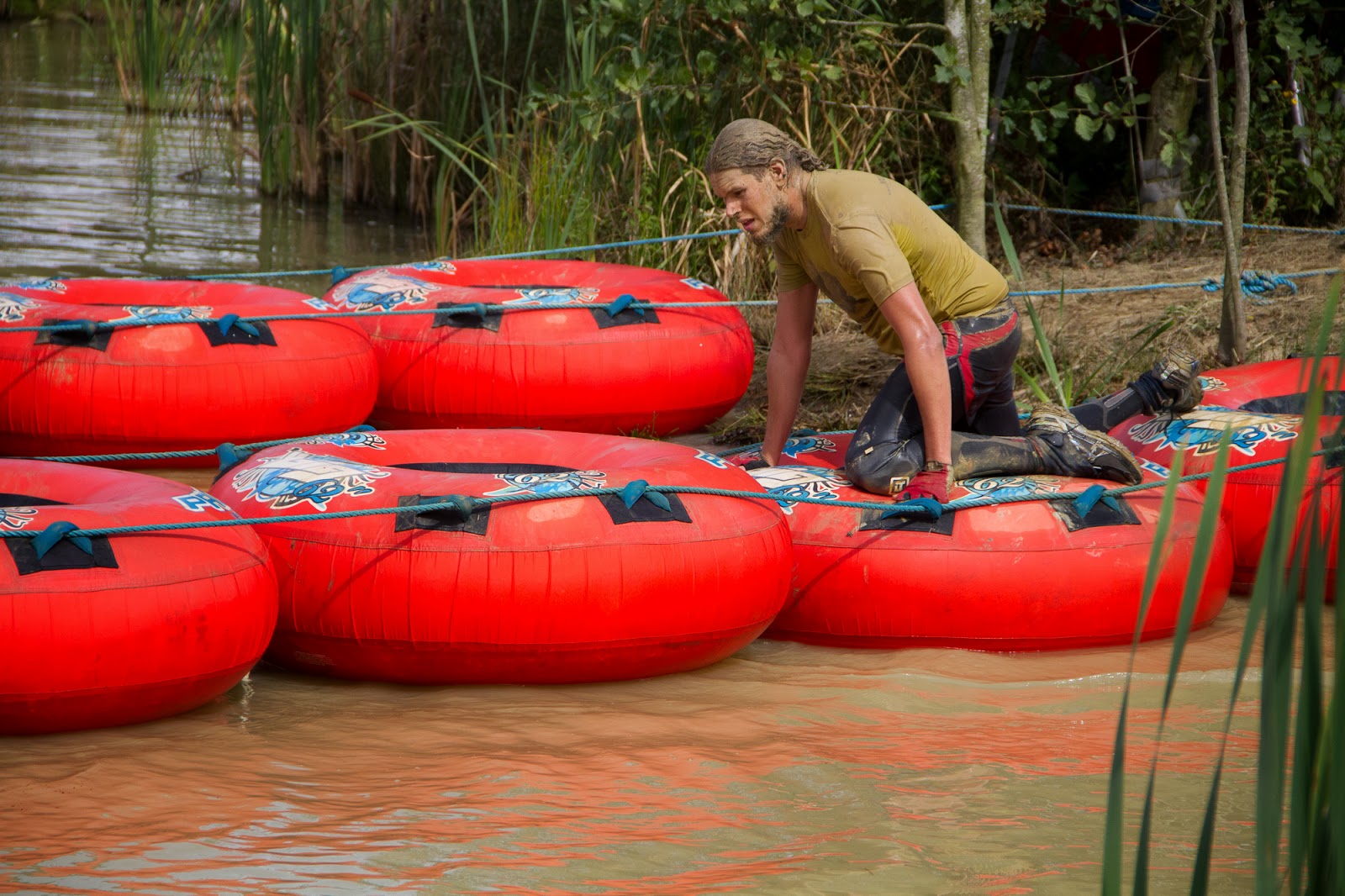 I felt slightly bad for Chris, who is a much stronger runner than me, as he often had to wait a bit for me to catch up. Although it did mean that whilst I was still merrily jumping over logs he had the time to pose for photos like the Ginger Gay Mudlord he is: 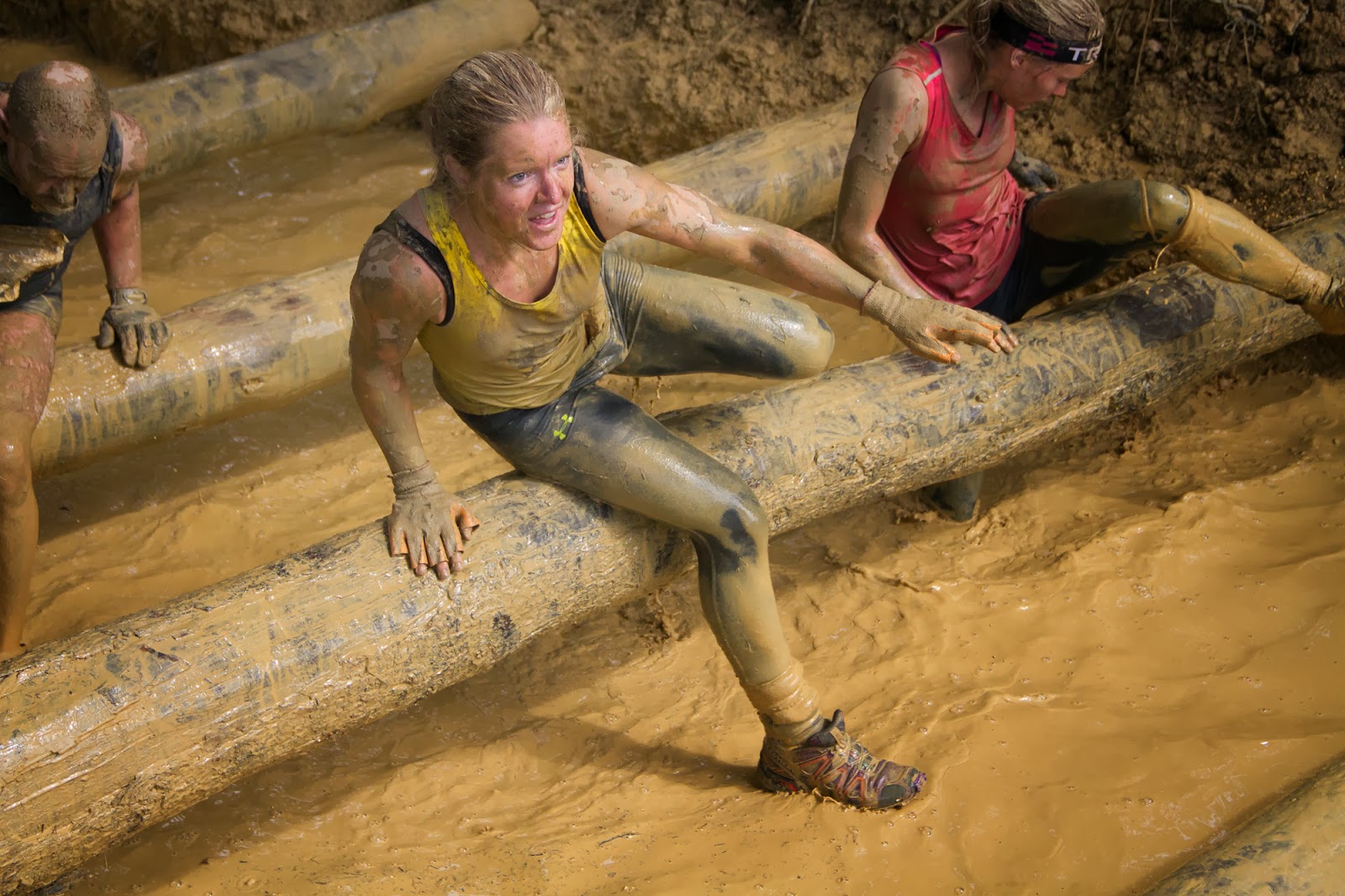 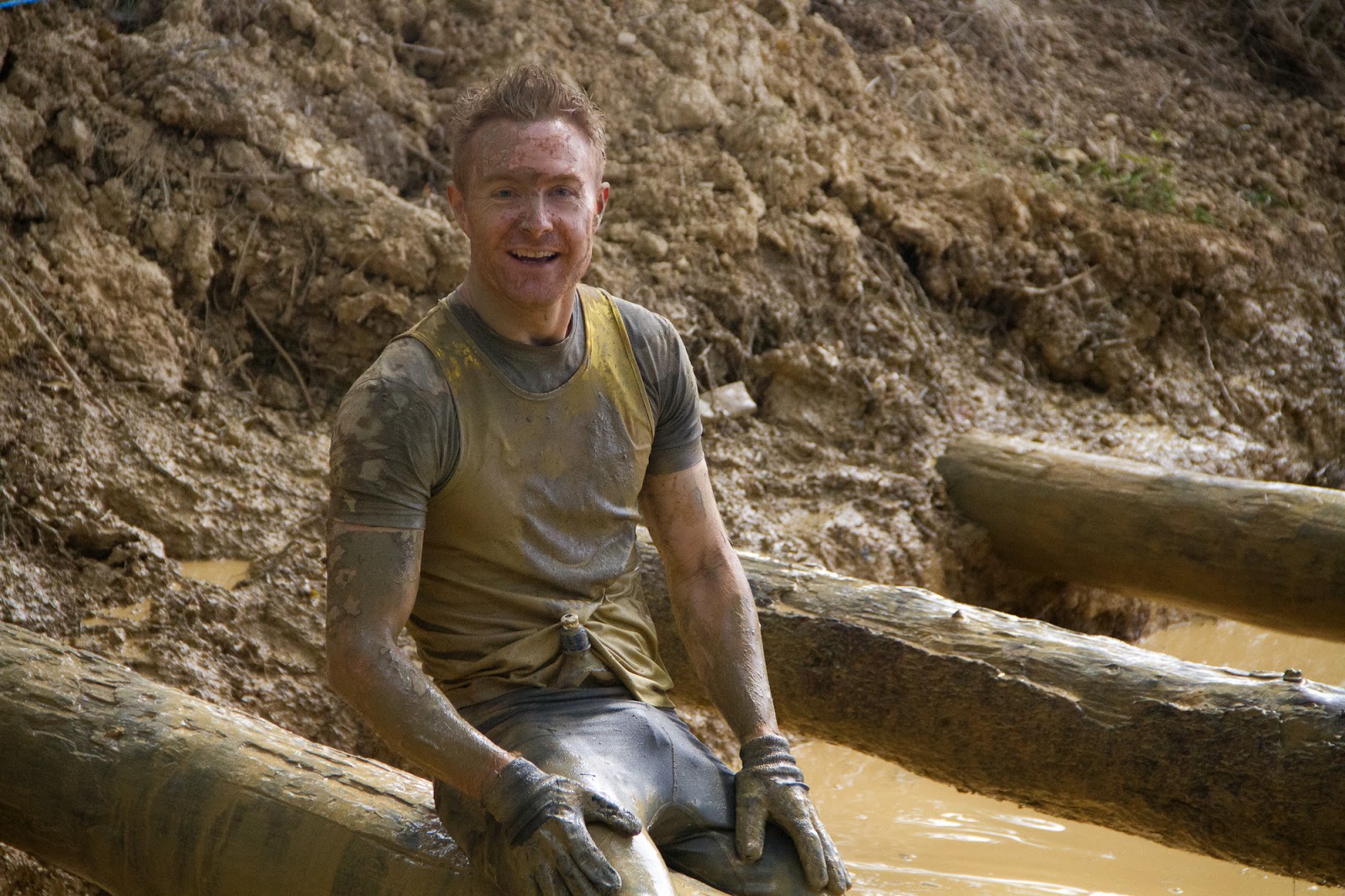 During last part of the final lap my knee started hurting (what I later found out would be the iliotibial band syndrome that has plagued me ever since), but I pushed on through to find out that I made it to second place! Given that at the start of the year I was doing the odd 5km on a treadmill, this was one of the biggest achievements I’ve ever made, and had you told me a year prior that I would be able to run a 21km trail run and actually enjoy it, I would’ve told you you were mad. I’m still, seven months on, enormously happy about this and drop it into any possible conversation that I can (which, let’s face it, isn’t very many).

After the race I was dead. But a happy kind of dead that only a thorough drenching in endorphins and total activation of all your body’s cortisol and adrenalin centres can bring about. After using up all my energy and repeatedly wading through cold water, then taking a cold shower to (try and) rinse off the mud, I was also cold. So cold that my lips went blue and people kept asking if I was ok. However I was just about able to muster a grumpy-happy smile for the camera’s. Chris obviously pulled his best catalogue model pose. 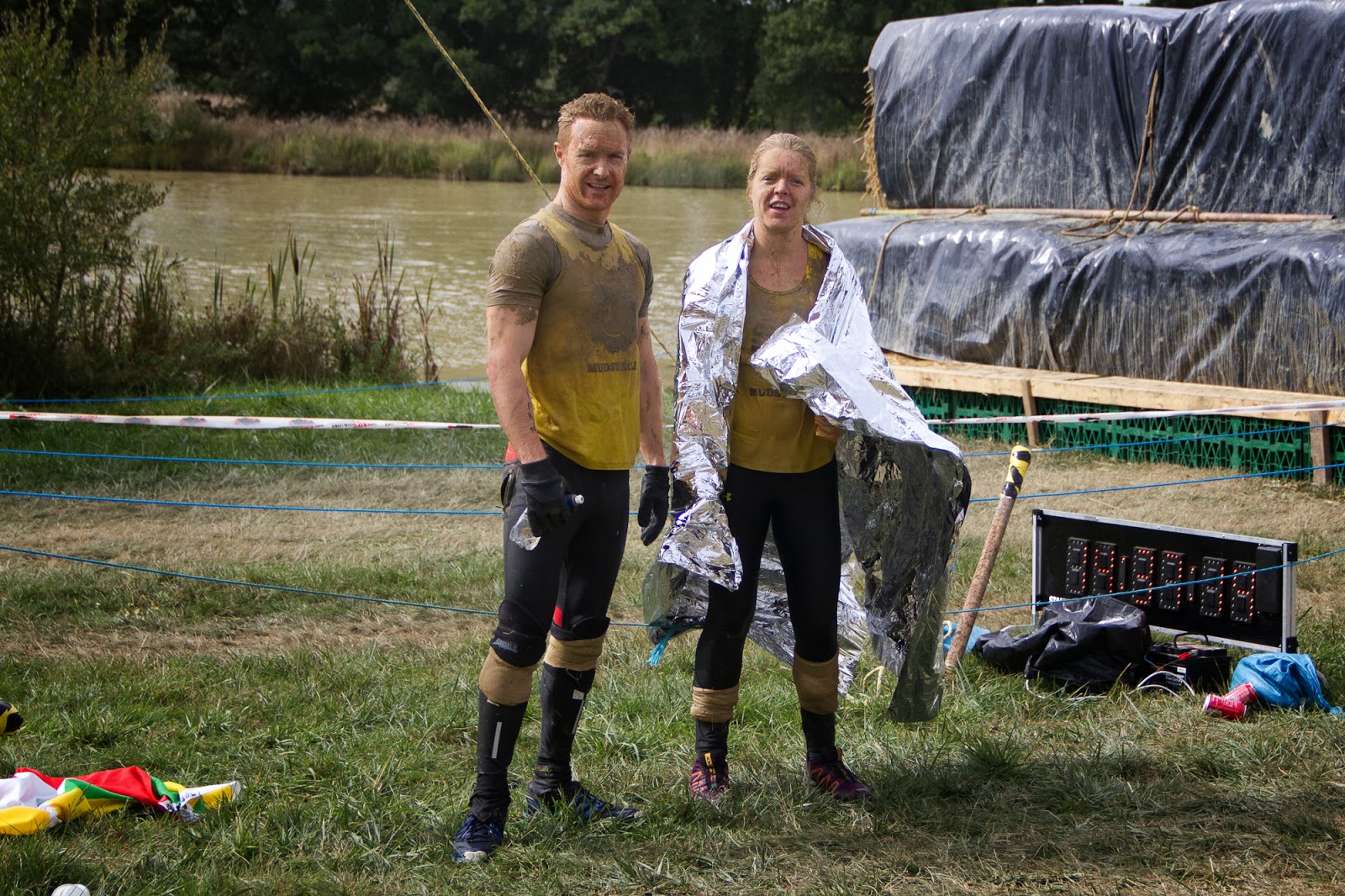 Fingers crossed I’ll be able to get back to normal running soon and start preparing for some events later in the year.
Thanks to Jon for taking the photos on behalf of Mudstacle (sadly an injury meant he couldn’t run Nuts). Go check out the site for all the latest OCR news, reviews and tips.