The best thing about summer, apart from the fact that it’s actually summer, is doing obstacle course races again. Woohoo! To a lot of people though, judging from reactions I get when I talk about them, the idea of the obstacles themselves seem a mix of scary, dangerous and outright insane. So I thought it would be a fun idea for a post to look at some of the biggest and bestest obstacles out there, which will either serve to make you want to do a race, like, right now, or reassure you that your decision never to do one of these things was the right one.

Last year, Nettle Warrior was The Big One – the race I’d first signed up for and the one I was always led to believe was the best. This year it was the first of many events of the season. Once again it was utterly awesome – the obstacles are immense in their scale, the course is varied and fun and the whole event pervaded by an air of total chaos, which I rather like. I suspect this is part manufactured by the farcical Mr. Mouse – an “ex Army” character who runs the event and comes across as more than a little bit bonkers – but also probably true to an extent. The fact that I managed to be the 5th female to cross the line at the 17km event has endeared me to this awesome event even more ;)

The obstacles themselves look like they’ve been built by a cack-handed giant who felled a pine forest,  bought a couple of kilometres of blue rope and tied together a bunch of trees. They are huge in scale (due to the fact it’s a permanent site), often very high, and also look like they’ve not even caught the eye of a health and safety officer, let alone passed his inspection. That said, they are sturdy as hell – at no point did I ever feel otherwise, this year or last – so I think (and hope) that’s just the impression they like you to have. They also have some of the best course marshalls of any event I’ve done who are pretty on-it when it comes to giving directions and making you feel like you’re in good hands.

The evening before the race, we went for a wander around the course. This is one of the first sights to great you as you head down the field. It was covered in ivy and had a giant pile of horse manure next to it (not part of the course). Note the caravan for scale. 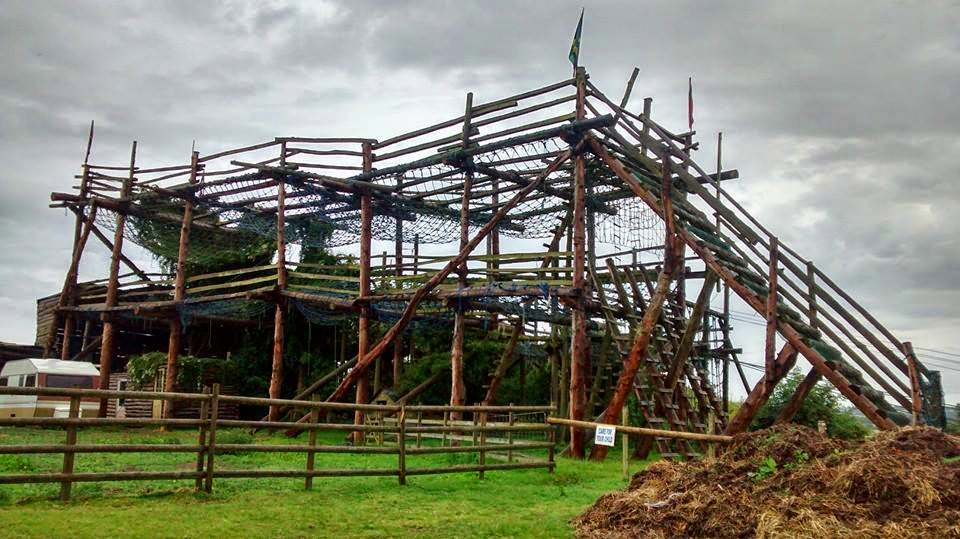 This is The Tiger – the biggest obstacle on the course: 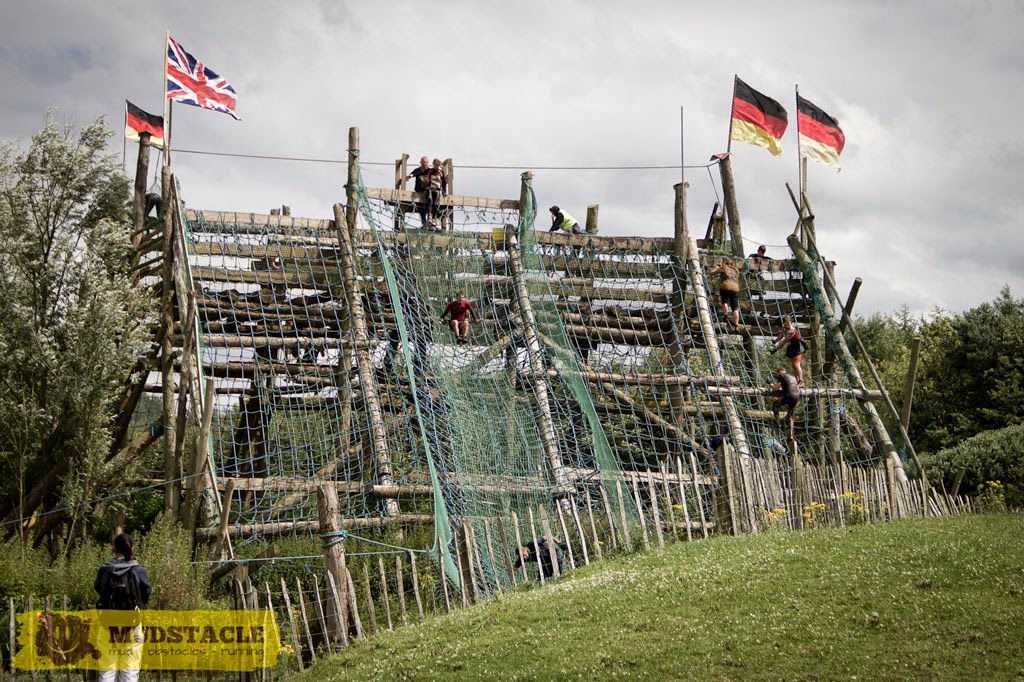 It’s not scary climbing up… 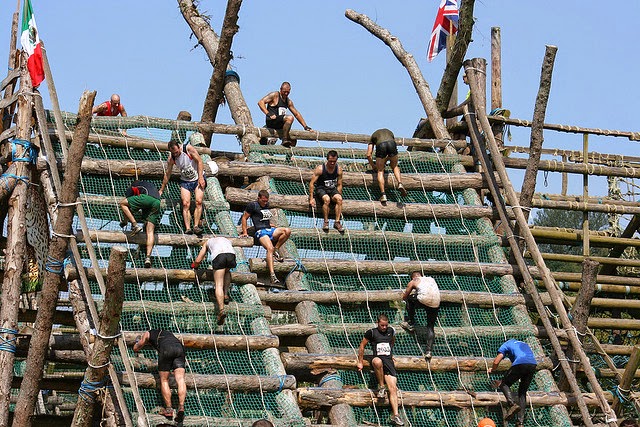 Photo by Liz Newton
Nor does it seem very high up at the top ;) 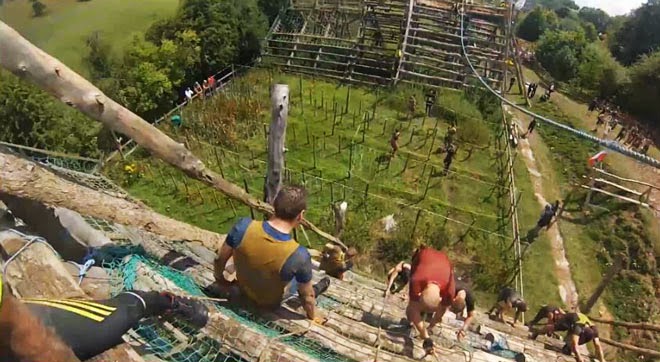 The water section is particularly awesome (and features more than a bit of blue rope and a fair few scaffolding planks): 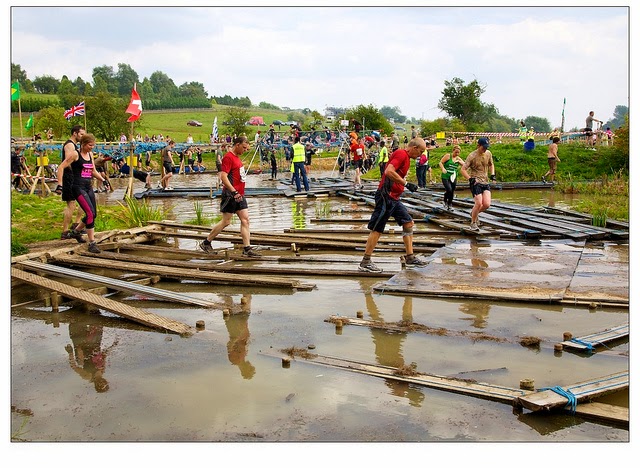 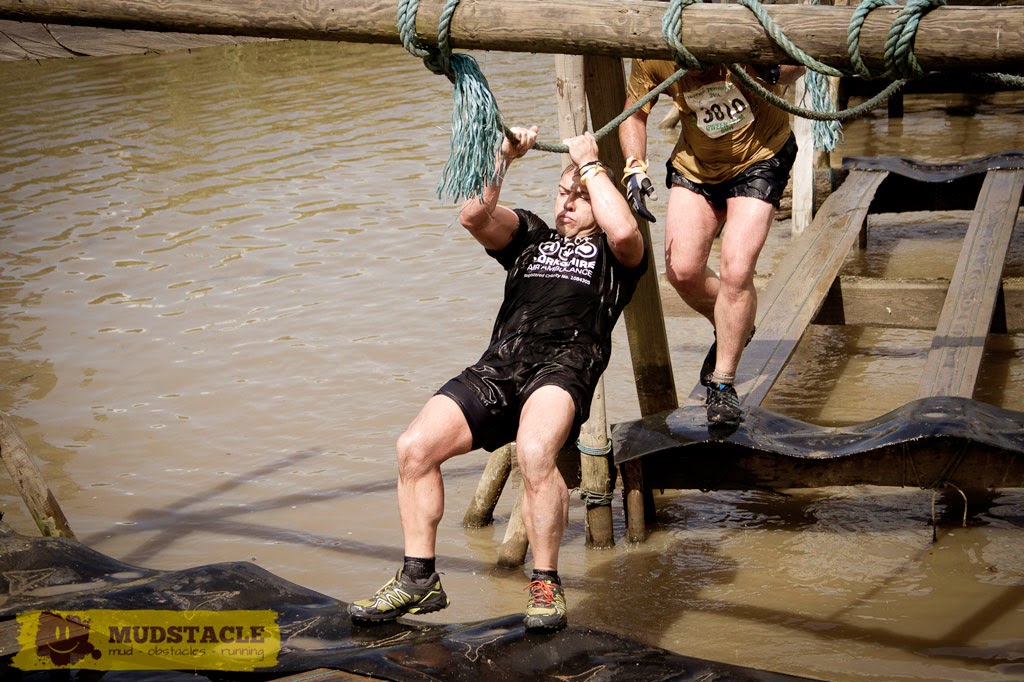 And of course there is also lots of mud. No OCR would be complete without mud! 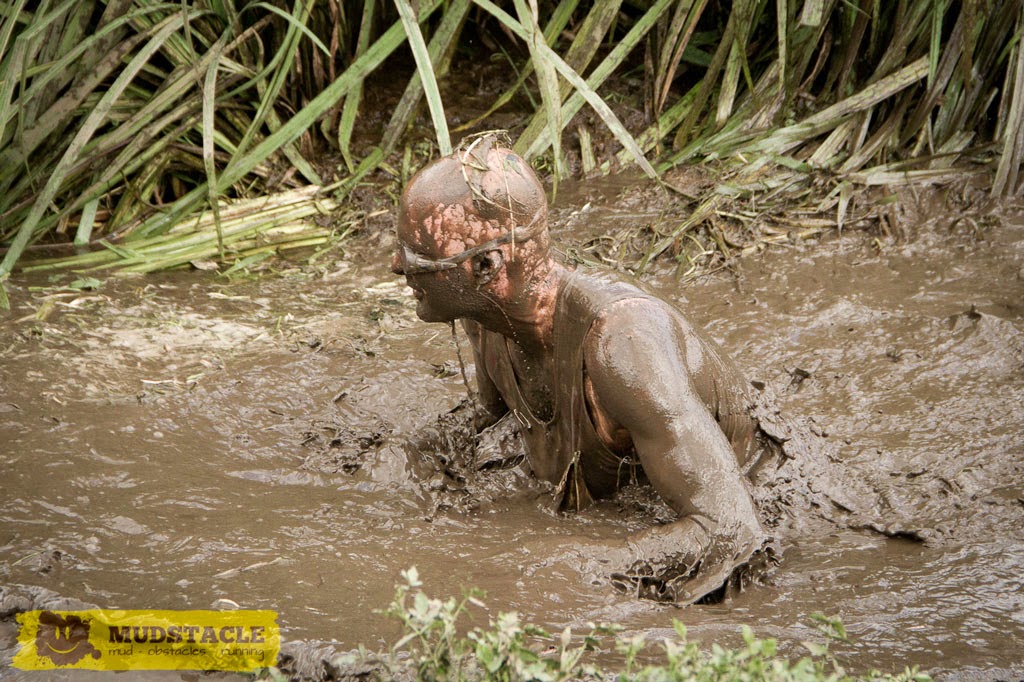 Whilst the Nettle Warrior obstacle are big, they are not very technical and in many ways not that challenging, beyond their size and the fact that you are pretty knackered by the time you reach them. If you want well-constructed, difficult obstacles that take skill as well as strength to overcome, then the king of the obstacle world is Dirty Dozen‘s The Beard, aka. Doug Spence.
A few weeks after Nettle Warrior I headed down to do another Backyard Jam, which is an obstacle course Doug has built in his garden. I won it last year, but this time Doug had added more obstacles, and (even worse) I had some serious competition. Whilst I nailed the obstacles (brute force serving me well) I was absolutely thrashed on the fitness front (damn those burpee penalties!) by Clare Miller and Lucy Martlew, and ended up coming third. Doug said at the start of the day “this is a course that will show you your week points”, and he wasn’t wrong. It’s been one of several massively motivating events for me so far this summer, and really made me focus on my cardio game.
Anyhow, blathering aside, the new Back Yard Jam obstacles were…. interesting. There was a rope climb as the first obstacle, which went straight into a heavy carry (not so bad for the girls, but the boys carry was insanely heavy, I suspect catch out those pesky fast runners who aren’t as strong as the Beasts of Team Beard). Then there were parallel bars to cross – no touching the ground – which caught a few people out… 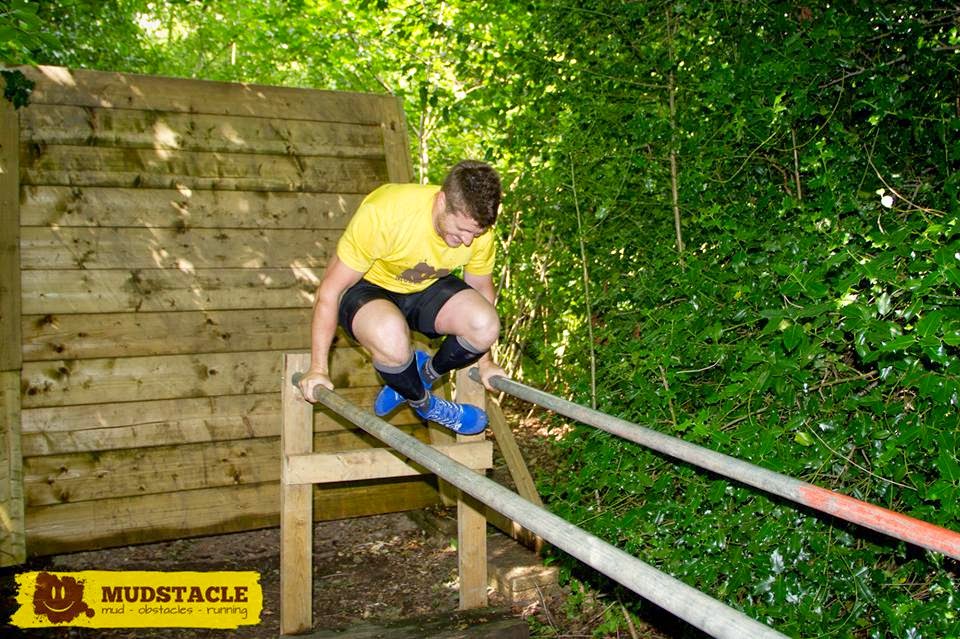 This was an interesting one: get through the hoop however you could. Easy for me – just like a bar pull-over – but although they don’t require much strength, they are tricky to perform if you don’t know how, and a lot of people ended up throwing themselves through however they could. 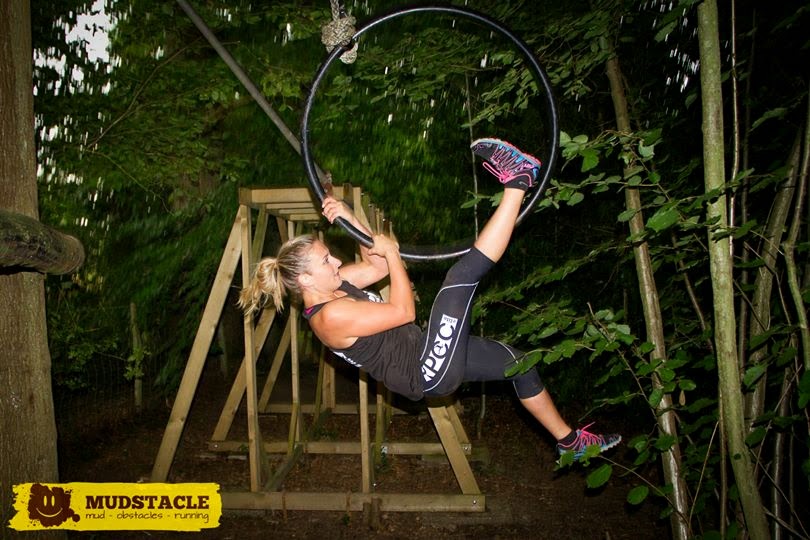 Check out the Mudstacle video highlights below for more madness, and congratulations to Jon Albon and Lucy Martlew for winning!

It’s one thing to build an obstacle course in your garden, but another to scale it up so that thousands of runners can smash their way across, over, through (or around – with burpee penalties!) your creations over the course of a weekend. So when I did my first Dirty Dozen race last weekend I was very excited to see what was in store, and it didn’t disappoint.
It kicked off with a 50 metre (yes, 50 metres!) rope traverse: 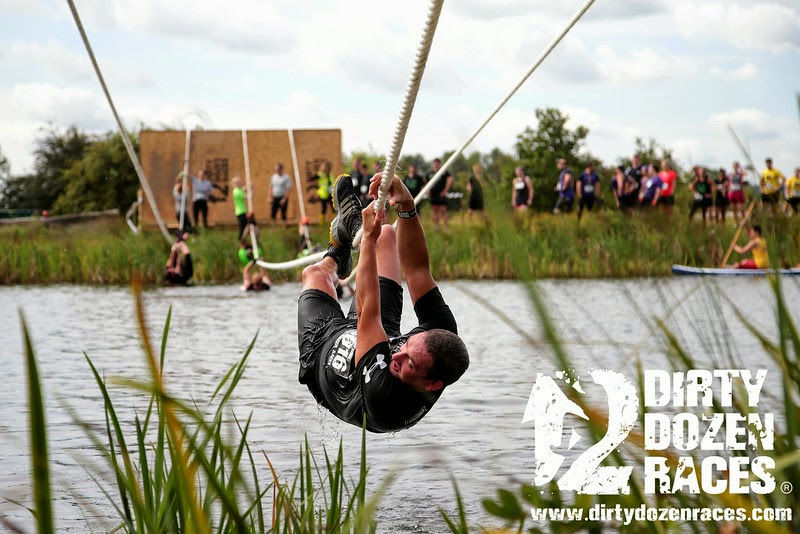 There was a very well constructed and just-the-right-length set of A-frame monkey bars, which you can see teammate and half-monkey, Chris, going across below (with me trailing behind on the back left): 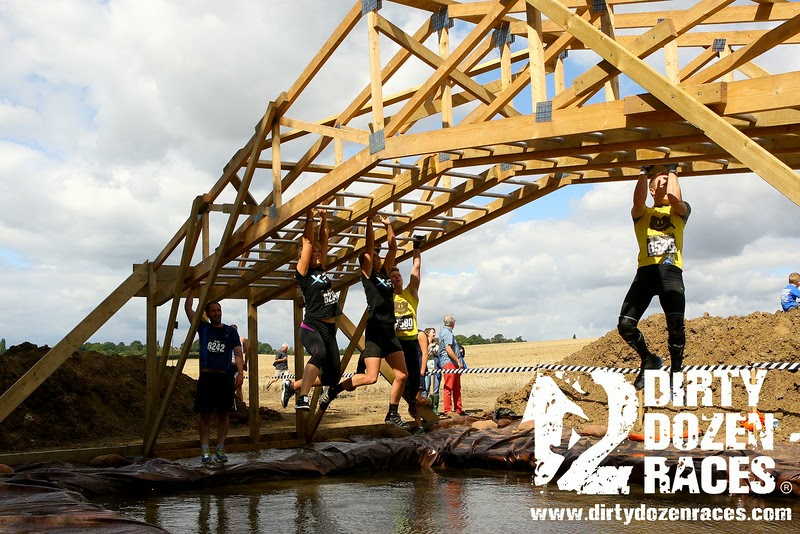 One obstacle I’d never seen before were these traversing walls – hold onto bits of 2×4 with your dear life and don’t fall into the cold water behind you. 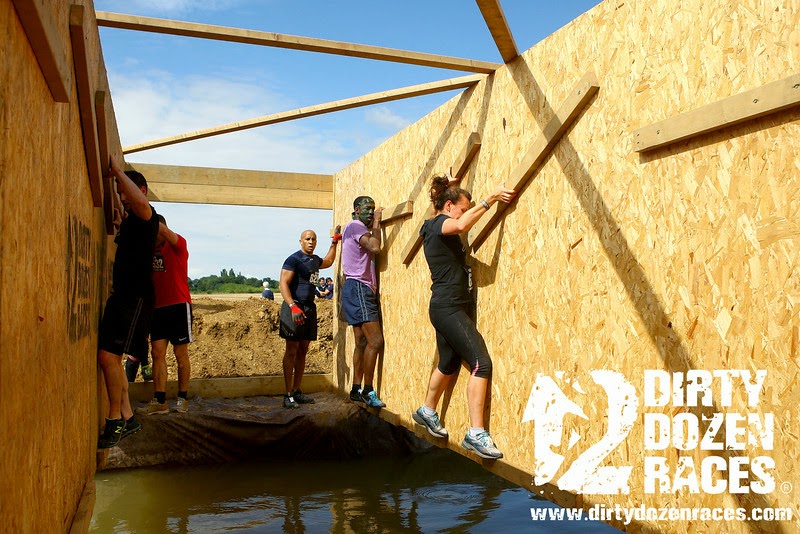 The Irish table was… tricky! Luckily my trusty teammate, who I had basically coerced into running with me in order to help me up obstacles such as this, gave me a wee bunk up, then I hauled my arse over the top. 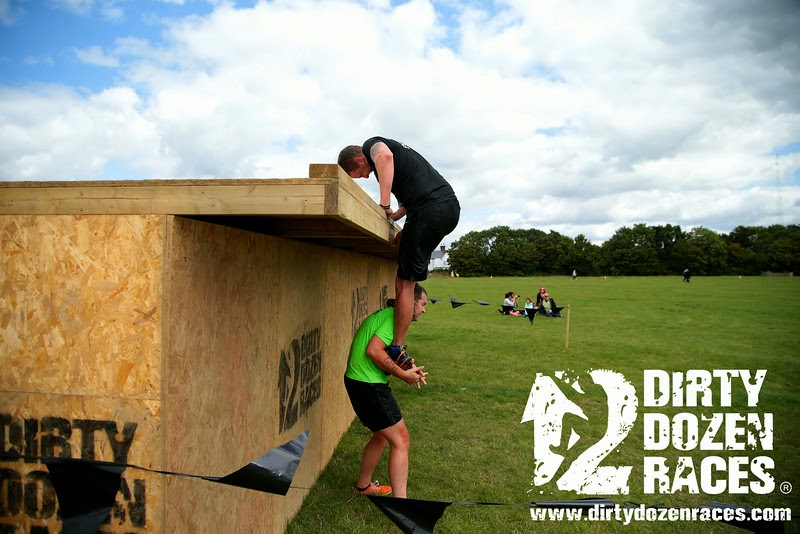 The final obstacle of the course was a 10 foot wall. “Intimidating” sums it up! This took some serious effort to get over – Chris climbed up and pretty much hauled me up by one hand. 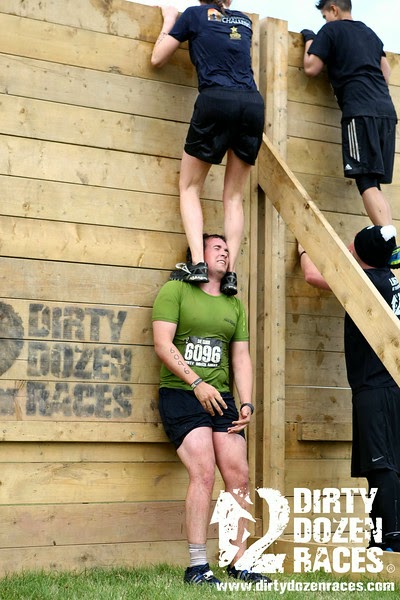 I don’t want everyone to think that obstacles are just there to be incredibly difficult to get past though (even if that is their primary purpose). A lot of the time they’re actually really fun. My favourite part of the Dirty Dozen course was a log carry, of all things. They had dumped a lot of soil in piles over a stretch of several hundred metres, making it more like a very technical trail run than a straight-up carry. Surprisingly, it wasn’t too fatiguing, and also very entertaining to be able to leap (as much as you can with a lump of wood in your hands) from point to point.
A bonus mention for a fun obstacle goes to Total Warrior, which I ran a month ago in the Lake District. To be honest, the whole damn course was an obstacle in itself – it was pretty much a fell run up a big hill for two miles in driving rain and freezing (ok, not quite) temperatures, and was on on a par with three laps of Nuts on the gruelling exertion side of things. There were, however, several things that redeemed it: I came 17th (out of the women), which on such a hilly course and with a field of 400 other women, I’m pretty damn pleased about. Also, they had good race swag – I got a mens t-shirt (good to sleep in, and The Shoulders don’t fit into women’s ones), a neck buff thing which has proved very handy since, a peanut Cliff bar and a mini Kendal mint cake. Happy days. Even if I was so cold that my lips went blue, teammate Jat has to help me get my leggings off (very embarrassing), Chris has to put all his spare clothes on me, and it took two cups of tea and a hot shower until I returned to normal! The other redeeming factor, coming quite near the end of the course, was this awesome water slide: 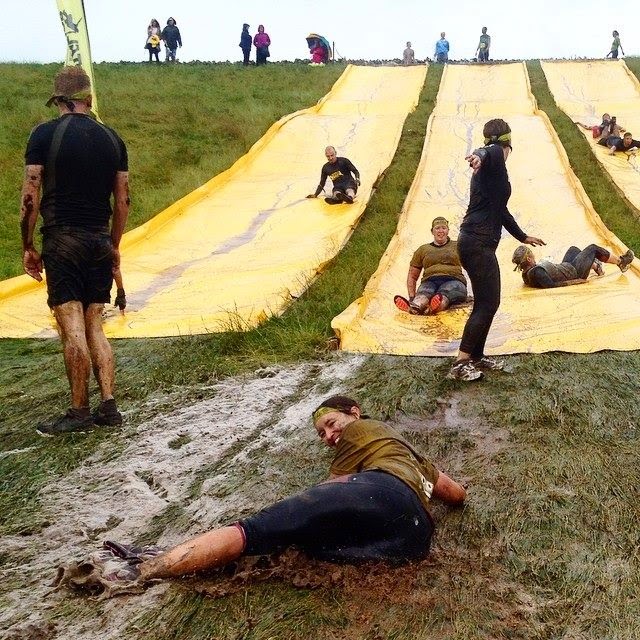 And there you go. Now that you know all about the worst (and best!) things you’re likely to encounter, you really have no more excuses not to sign up!

If you’re in/near London and fancy getting involved, then Dirty Dozen is holding several events over the weekend of the 27th and 268th September: a 6km, a 12km and an 18km. I shall be doing the latter!

And since The Beard is so far-reaching in his awesomeness, he’s set me up with a discount code: use “FionaS” and you’ll get 10% off.

Go here for all the information and to sign up. Go on. You know you want to…